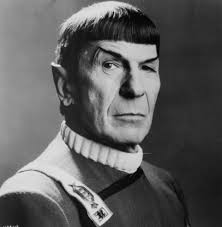 I grew up with Star Trek. I have vague memories of my father taking my brother and I to see Star Trek II: The Wrath of Khan at a theater. It must have been part of some kind of commemorative re-release, since the film came out in 1982 – three years before I was born. Later, he took us to see Star Trek VI: The Undiscovered Country, which remains my favorite Star Trek film to date (for which Nimoy helped develop the story). Throughout elementary school and into middle-school, my brother and I watched early afternoon reruns of the Star Trek: Original Series. Despite its many flaws and more misguided moves (the entirety of Star Trek: Voyager, for instance) Star Trek is my favorite science fiction franchise, period. It is absolutely brimming with a refreshing eagerness to explore new frontiers, to transgress the boundaries of the unknown. Especially in its earliest iterations, Star Trek was often a source of insightful and thought provoking social commentary and small but invaluable lessons about humanist values.

At the very center of all this was Star Trek’s Holy Trinity: James T. Kirk, Leornard McCoy, and – of course – Mr. Spock. The relationship between these characters evolved as the series progressed, especially as the franchise expanded into cinemas in the late ’70s, throughout the 1980s, and into a fantastic denouement with 1991’s The Undiscovered Country. These were fictional characters, but their influence on my personal worldview was entirely real. In particular, they informed my ideas about the value of friendship and the importance of loyalty. Leonard Nimoy’s iconic portrayal of Spock was central to that. So, though Leonard Nimoy was – to me – a complete stranger, I do feel a sense of loss at the news of his passing. His portrayal of Spock helped shape the early development of some of my most strongly held values: curiosity, skepticism, critical thought, friendship, and loyalty. He will be missed.

The closing scene from The Undiscovered Country. Nimoy’s line as Spock really makes the scene.