Trophy hunting has recently become a sociopolitical lightning rod. With the high profile cases of Walter Palmer and Sabrina Corgatelli circulating through the headlines and echoing across social media, people are taking note of a form of recreation whose propriety is in need of serious evaluation. To the extent that this has drawn attention to issues of sportsmanship, fair chase, and conservation, it has been a positive development.

However, these developments have also cast light on something rather ugly. Clamoring for justice and retribution, denizens of the internet’s most popular social media platforms have allowed their understandable feelings of disgust and outrage to coalesce into reactionary mobs. While I can sympathize with the underlying sentiment – the feeling that what these people have done is hideous and reprehensible – the response has been altogether baffling.

Make no mistake: this type of behavior sets a precedent whose sinister implications are myriad. The potential for ideological allies to cohere into frenzied mobs – posting people’s personal information, calling for their termination at their place of employ – whenever they catch a whiff of dissension is something everyone should look at with sickening unease. The winds of righteous indignation can be rather indiscriminate. What sates one person’s lust for justice stands to infringe on another’s ability to achieve the same.

The signal fact that nothing good has ever come from acquiescing to the demands of mobs should not be casually swept aside when you happen to find yourself agreeing with the base sentiments that stimulate a given mob’s rancor. Would it not seem an affront to the ideals of individual liberty and freedom of expression if Christians began to demand the termination of vociferous atheists? Would it seem appropriate if conservatives clogged the social media account of an organization upon learning that one of their employees had recently had an abortion?

People will sometimes do things we don’t agree with. There will even be times when it might be possible to pose a strong argument that those things are unethical. But the idea that anytime someone offends the boundaries of someone else’s ideological sensibilities is a time we can expect the formation of digital witch hunts, bent on driving their targets from their place of work and leaving them no quarter anywhere in the public sphere, is truly abhorrent.

People should feel free to debate ideas – even contentiously, when civility seems beyond reach. They should not, however, feel it their right to foist their ideas on others through the brute force of mob outrage. There are far more productive means of combating nefarious behaviors like trophy hunting.

For instance, perhaps you might consider pouring all that emotional energy into an email to your congressman, demanding a ban on the import of trophies. Or maybe give a few bucks – as much as you can – to a reputable conservation agency and do your part in undermining the economic incentives associated with trophy hunting. Maybe the World Wildlife Fund, the National Geographic Society, or the National Wildlife Federation. It might not be a sure cure for your raised hackles, but it will definitely do more to help preserve the species the opponents of trophy hunting are concerned about protecting than getting a few individuals fired.

Just don’t make it your mission to become the cosmic hand of justice. That’s never worked out well for anybody. 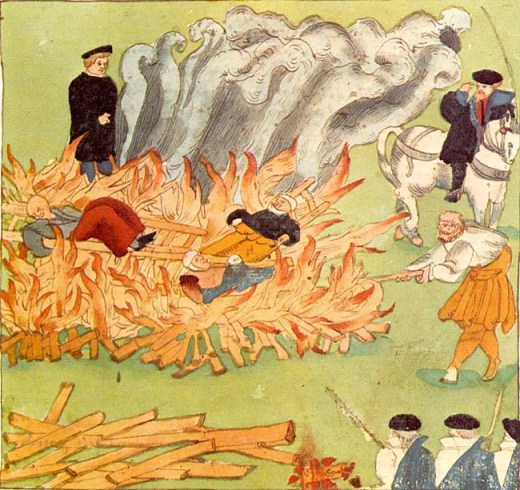 Johann Jacob Wick’s (1585) depiction of the burning of three witches in Switzerland.